Recent Earthquakes in the Dallas Area: Fact vs. Fiction

There have been concerns that fracking in general, and injection wells for disposing of flowback fluids in particular, increase the probability of earthquakes in the Bakken shale (Dallas-Ft. Worth) area.  This has led to a referendum and subsequent fracking ban in Denton, TX.  Even the Texas Railroad Commission, while not subscribing to this theory, recently revised the process for applying for injection well permits.  Recent earthquakes in Dallas have only led industry critics to feel justified in their views.  However, the truth is very different.  What follows is an excellent explanation of what is happening and why, which was written by Craig Pollard, VP Exploration at Cinco Resources, Inc.

As most of you have noticed we are getting a new round of earthquakes in the Dallas area during the last several months. The source of these quakes are being calculated to be near 16,000′ deep and centered around the old Cowboy stadium. I pulled a few pages out of some great old papers to give you an idea of what is probably going on.

300 million years ago there was a mountain range here due to plates colliding together much the same way the Himalayas, the Andes, and the Alps are being created today. This mountain range (Ouachita Mountain Range) was somewhat weathered away but mostly buried below Dallas and Waco a couple of hundred million years ago. This old range was never hiding from scientists and has been studied for ages. The best way to see its location it is through gravity mapping which shows density contrasts in the earth’s crust. The browns and the reds below highlight the density contrasts.

Dallas is sitting right on a linear density anomaly that is coincident with that buried mountain range. This old range can still be seen in Oklahoma at the surface (the pink on the map below) 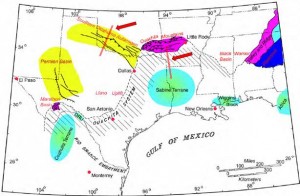 Back in your schooldays you were probably forced to learn about continental drift. That idea that the crustal plates are somewhat ridged and move like rafts upon a more ductile layer called the mantle. If you want some more here is a Wiki on continental drift.

A geologic feature of the scale of an old mountain range like the Ouachita Mountains will always need a bit of adjustment as it rides on its raft across the Earth. Those adjustments can be detected by us as earthquakes.

Bottom line the earth is alive. These particular earthquakes are not caused by fracing, but from Earth just stretching and relaxing a bit.

Call or come by for more confusion!!